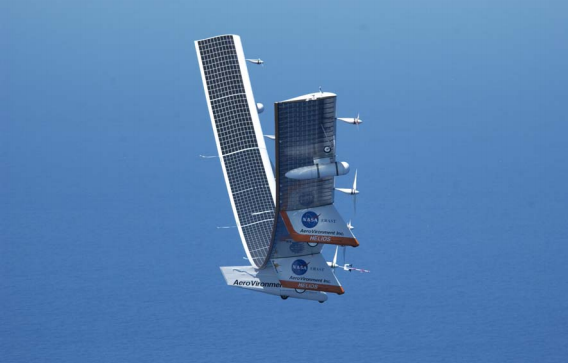 The NASA ERAST program was a 1990-2000s effort to develop an unmanned (but remotely-piloted) drone. It used solar panels and batteries to fly for a day at a time, and several generations of prototypes were developed by Monrovia, CA company AeroVironment. In an effort to get continuous flight, the batteries of one of the last prototypes, Helios Prototype 03, were supplemented by a fuel cell system with high system energy density.

The original design concept was to use a paired electrolyzer / fuel cell system that could generate hydrogen and oxygen during the day and store it, and then feed the gases into a fuel cell to supply electric power at night. These are almost certainly the Giner stacks mentioned in a 2001 press release.

Giner mentions 400 psig pressure. Electrolyzers easily deliver high pressure gas, but fuel cells normally are not designed for these conditions, and a NASA report suggests the tank pressure would be throttled down to 50 psig at the stack. Still, performance of the stack would be very high with this combination of pure oxygen and 50 psig pressure, allowing high mW/cm2 and therefore a very compact, light-weight stack. Round trip efficiency would likely have been around 50%, but the light weight of the energy storage medium (compressed O2 and H2) would have meant a significant improvement over an all-battery system.

Unfortunately, NASA concluded this system did not work reliably, so the HP-03 prototype switched to a fuel cell running on hydrogen stored in tanks (hydrogen that was generated on the ground) and taking in oxygen from atmospheric air. The electrolyzer would be eliminated. In this case flight time would be limited by the amount of hydrogen in the tanks, to 7-14 days.

This new fuel cell was an adapted General Motors automotive-class stack built by Toronto, Canada company Hydrogenics, back when the two companies had a strategic partnership. The stack had some interesting specifications: 188 cells x 800 cm^2, 18 kW (gross?), 5 psia. This low power density operating point (120 mW/cm^2) is due to the harsh operating conditions – extreme cold and low atmospheric pressure (only 0.02 bara at 30 km). A compressor raises the air pressure to 0.3 bara but this is still far lower than normal sea level air pressure. Overall this stack appears to be bigger and heavier than the original high-pressure stack concept. 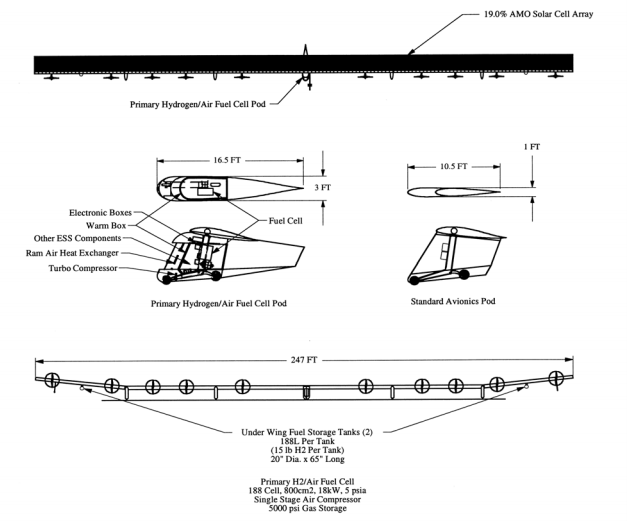 In the end the HP03 prototype crashed into the ocean west of Hawaii on one of its early test flights, due to turbulence affecting aerodynamic stability. Wind forces caused the flexible wing to bend up into a sharp U shape (pictured above) and the aircraft started to accelerate and shred itself.

The fuel cell was not even running during this part of the test, and sunk and was never recovered. Somewhere in the ocean $6,000 of platinum is slowly dissolving into the ocean.

(All data and photographs are from NASA’s report Investigation of the Helios Prototype Aircraft Mishap and Matthew Steinbroner, “Something New Under The Sun” in Evaluation Engineering 2002) 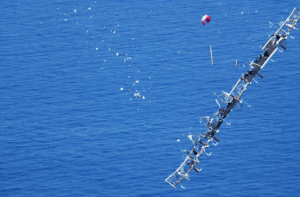