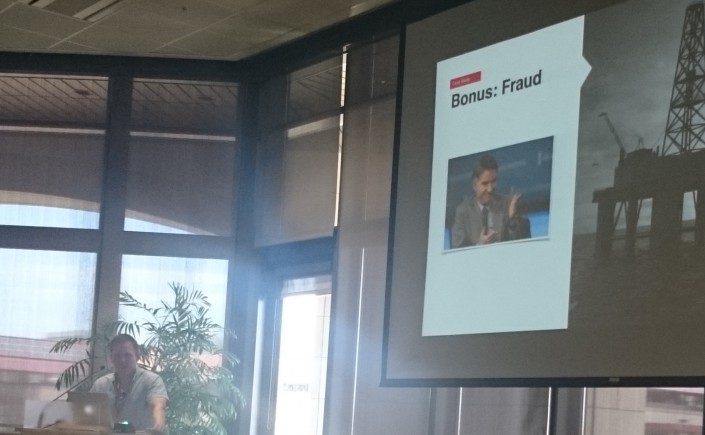 There were some interesting talks at the Net Energy Analysis workshop at #GCEP #Stanford.

“The bandwidth for communications with policymakers is astonishingly low. For example, my father worked on communications with nuclear submarines. The bandwidth is very low, basically an antenna the size of Wisconsin is used to transmit 20 characters to the sub commander, who says ‘Yep, I guess I’m supposed to destroy the world’ “. – Howard Gruenspecht, deputy administrator of the EIA

“Policymakers are not like … well, they don’t do what you and I would do if we were policymakers. For example, they care a lot more about the short term, and about distribution than anyone who does academic work does.” – Howard Gruensprecht.

Peter Thiel spoke on how to profit from a peak-oil, energy-constrained future.

“I was pitched a new energy idea just today. My first instinct was to ask ‘Is it fraud?’ “

“We’re in an environment where Exxon is buying back their shares, even though the interest rate is zero. Basically, they’re saying ‘We don’t have better ideas for that to do with the money’ ”

“This owner had a series of companies like OGX with three letter names, all ending in X, where X is supposed to represent the multiplier on your investment. Naively, we thought that X was greater than 1.”

He was quite pessimistic about actually investing in energy technology as a VC, and argued that if solving peak oil was an easy problem, successful companies would have sprung up already, and that the lack of successful companies was an indicator that the problem was a complex one (cue a chorus of agreement from the industry). Seems a bit tautological but I sort of understand where he’s getting at.

The big oil companies are good targets except they are vulnerable to political pressure, e.g. Russia / Khodorkovsky .

So if you believe it’s not a good idea to invest directly, then what? Thiel argued that the growth and wealth creation of technology companies was actually a good way of investing in an energy-constrained future, because their economic growth would be orthogonal to energy prices.

Also, get out of (or short) energy-sensitive products like Hummer cars, huge McMansions, and exotic vacations to distant places.

Finally, why is it so hard to invest in general? “A business creates X dollars of value and captures Y% of X. X and Y are independent variables. Often, Y is zero.” Inventors and scientists sometimes believe that if X is big enough and has enough societal value then the Y will happen naturally.