Ladies and gentlemen, I present you with the world’s worst fuel cell headline. Use it and you’ll be just as original as the 1,200 other people who have used the title over the years – like the LA Times, MIT Technology Review, Fortune, Associated Press, Bloomberg, Popular Mechanics, and everyone else who’s ever heard of a hydrogen fuel cell. 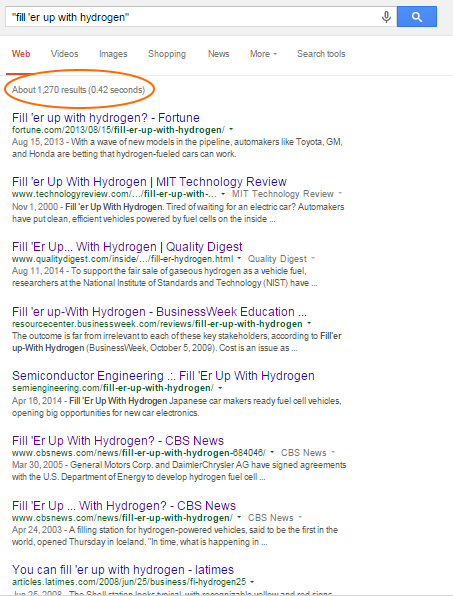 “Fill ‘er up with hydrogen” is not only not original, it’s not new. The earliest use of that title I could find was almost 25 years old: a 1991 Business Week article by John Templeman (though at least he was polite; he wrote “Fill Er Up – With Hydrogen, Please”)

The phrase itself is almost 70 years old – an Iowa State engineering magazine used the phrase when describing a hydrogen-powered rocket motor.

Do me a favor, though, and don’t follow the example of CBS News. They used The Headline twice in two years, and even slapped the same stock photograph on two different AP articles: